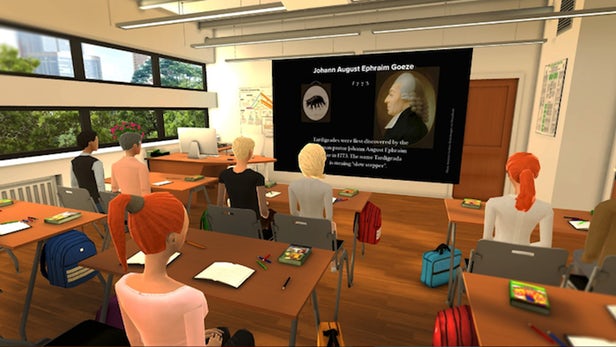 Horror games are often scarier in VR than anywhere else, but start-up Cerevrum is using the technology to help people face a different type of fear: public speaking. Picturing the audience in their underwear doesn't help much, so the company's Gear VR app, Speech Center VR, drops the user in this familiar, uncomfortable setting to help people feel more confident in front of a crowd.

Some of those uncomfortable scenarios include presentations, sales pitches, job interviews, and negotiations, which Speech Center VR reproduces with a host of animated, very Sims-like avatars staring expectantly at you. Pre-set interactive lessons can bring you up to speed on certain areas, or if you're practicing a specific presentation, upload it to the app and test it on a virtual audience first. More detailed feedback can be wrung from an audience full of avatars controlled by other human users.

"We started with public speaking because it is one of the most important soft skills we can learn, and yet, it often requires us to overcome our fears," says Natasha Floksy, CEO of Cerevrum. "VR has the unique ability to closely replicate uncomfortable scenarios, so the more students and professionals practice withSpeech Center VR, the more comfortable they become with those scenarios."

That semi-social aspect is another key focus for the platform, with users able to share presentations and documents in Powerpoint, PDF, JPEG or PNG formats. To help them past the limits of self-guided practice, real-time or recorded lectures can be virtually sat in on, for more tips on effective communication. Presented by speaking coach Sean Michael Thomas, "The Art of Public Speaking" will be the first viewable course, with later events covering networking skills, selling, negotiations, and even dating.

A business-focused version of the app is also available for corporations to create an internal database for training staff. Employees can watch pre-recorded or live presentations, which the uploader can flag as either successful or unsuccessful, to give the examples a little more context.

"VR's ability to immerse a user into a given subject, to command their full concentration, and to bring other users into that same space, helps stimulate comprehension, engagement and retention of information, whether that's in a classroom setting or the corporate world," says Olga Peshe, COO of Cerevrum.

Speech Center VR is now available on Samsung Gear VR for free, with the option of in-app purchases.